Swing for all you're worth,
Strike with hurricane fury
Learn to take the same.

Back in April-ish of this year, I had the good fortune of being invited to help out with Team Sawblaze (many thanks to Jamison, Lucy, and John!) for season 4 of Battlebots. This was a pretty big deal for me, since I still remember watching from the Comedy Central days back in the early 2000s. It probably had a substantial influence on me becoming a mechanical engineer and getting into robotics, and despite that, I guess it never occurred to me that I could actually participate in it. It was a little over 2 weeks of filming, filled with a lot of things getting broken (sometimes by us, sometimes by other people), dumpster fires (sometimes literal), and me geeking out over seeing builders/drivers from TV in person.

Case in point (me standing awkwardly next to Jim Smentowski, builder of Nightmare/Backlash): 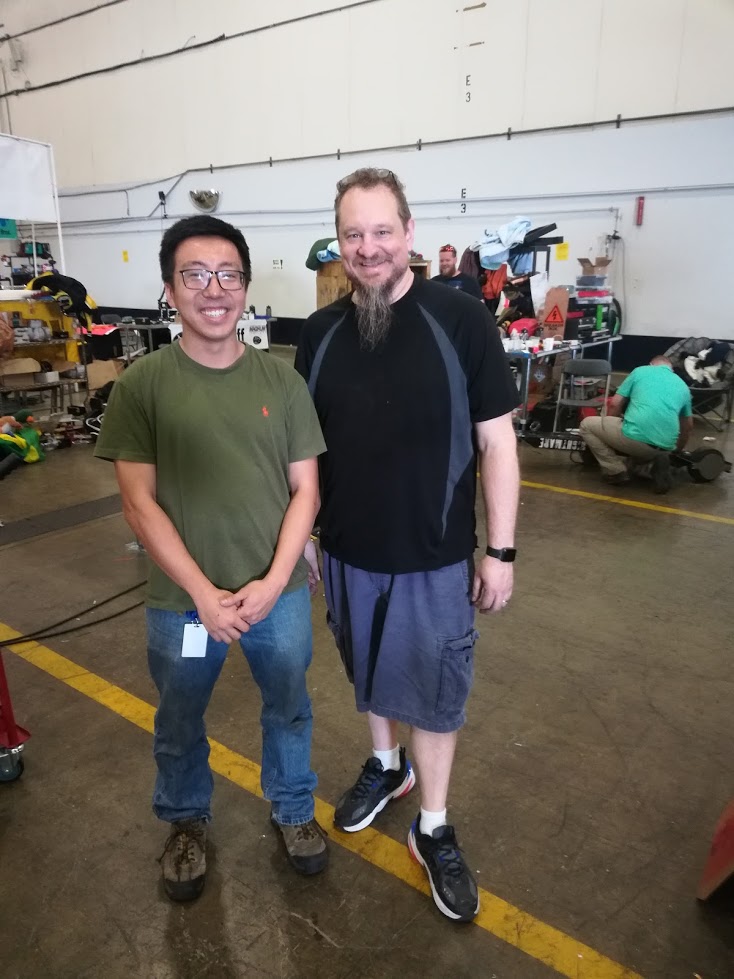 The team put me to use grinding metal, lifting heavy things, and extracting stripped bolts, things that my PhD in mechanical engineering from Yale obviously prepared me for. To be clear, I had the time of my life. I also took a lot of naps, but that's a normal occurrence for me: 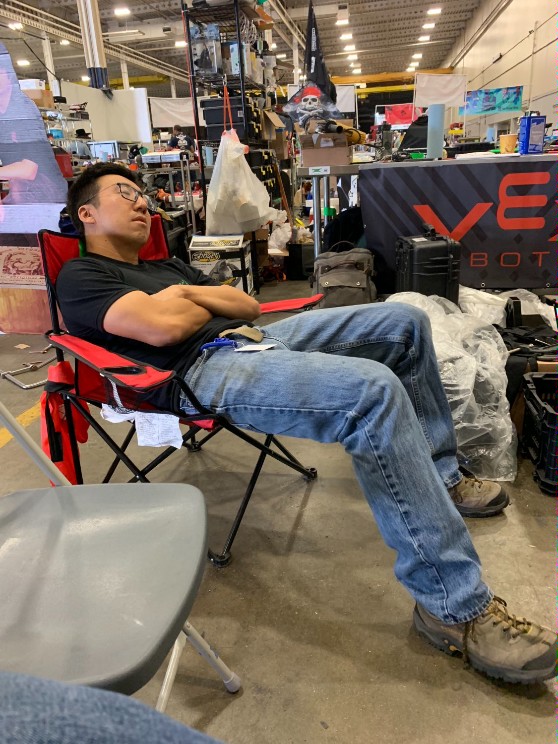 Getting to see heavyweight (250lb) class battlebots up close and personal is pretty insane. Getting to see the damage that they inflict on each other is pretty mind-blowing. The Battlebots show spaces out the fights over months, so the audience really doesn't get a sense of the crazy turn-around necessary between fights to get bots repaired and back up/running. It wasn't uncommon towards the end of filming to see bots, backed by months of design and preparation, held together by last-minute welds, wrong-sized (but close enough) parts from McMaster/Harbor Freight/Home Depot, and prayer. Mostly prayer. Sawblaze was no exception to that rule after a few fights (we got pretty wrecked by Tombstone and Witch Doctor): 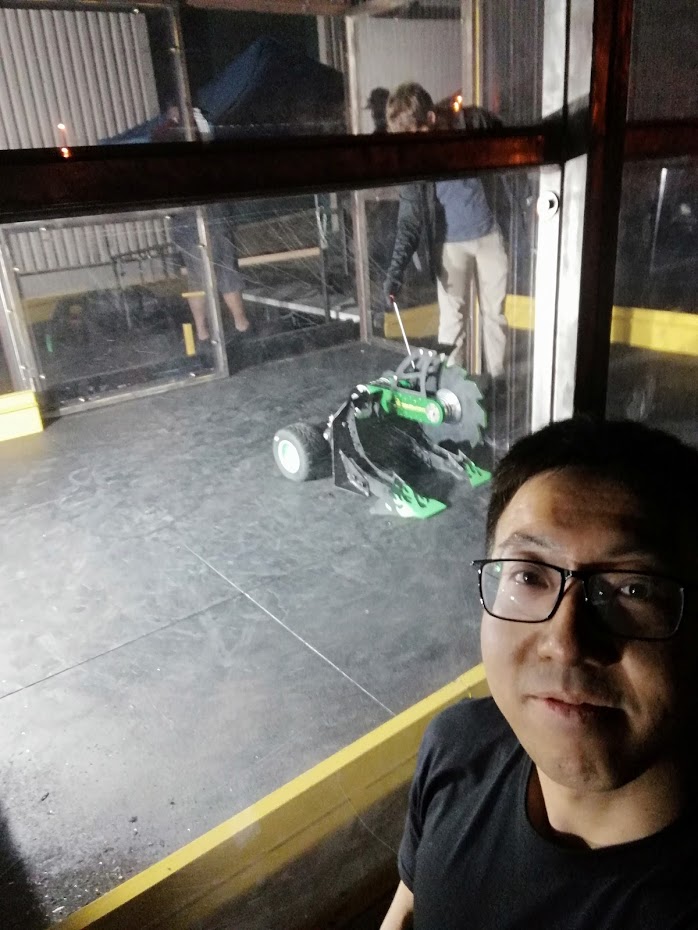 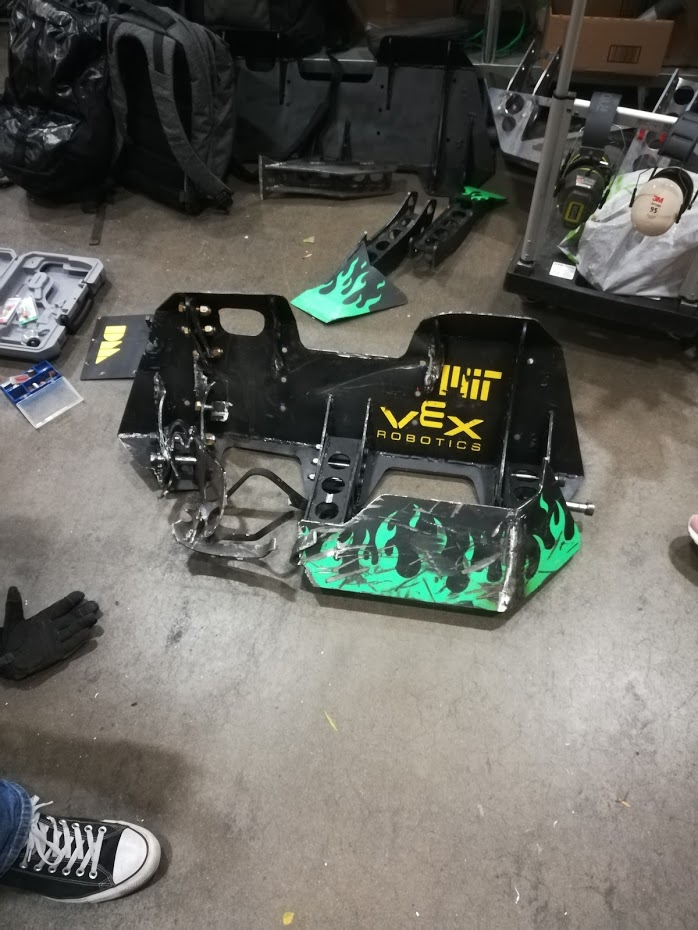 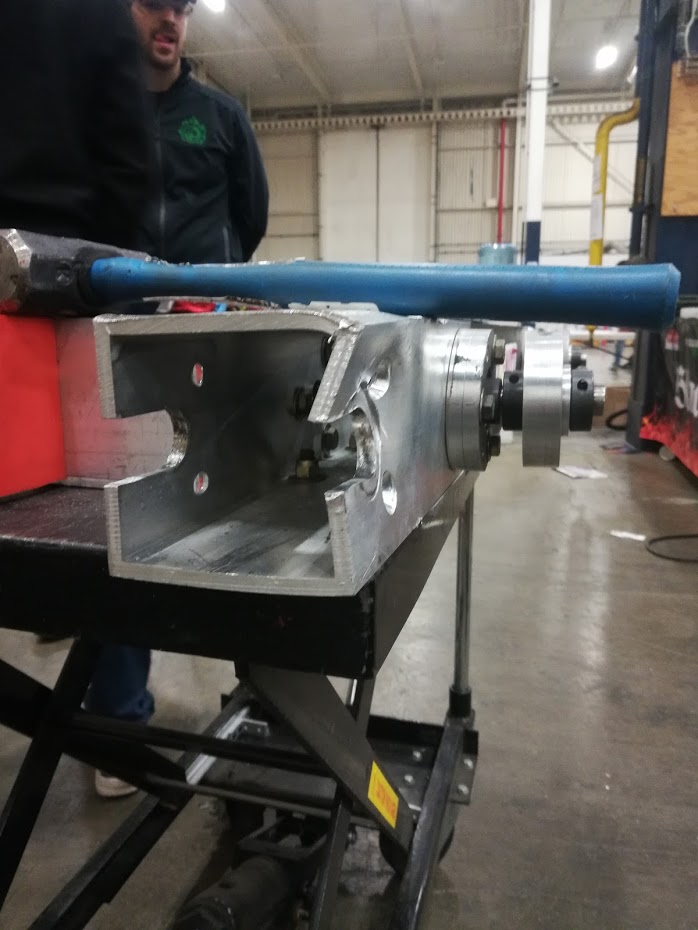 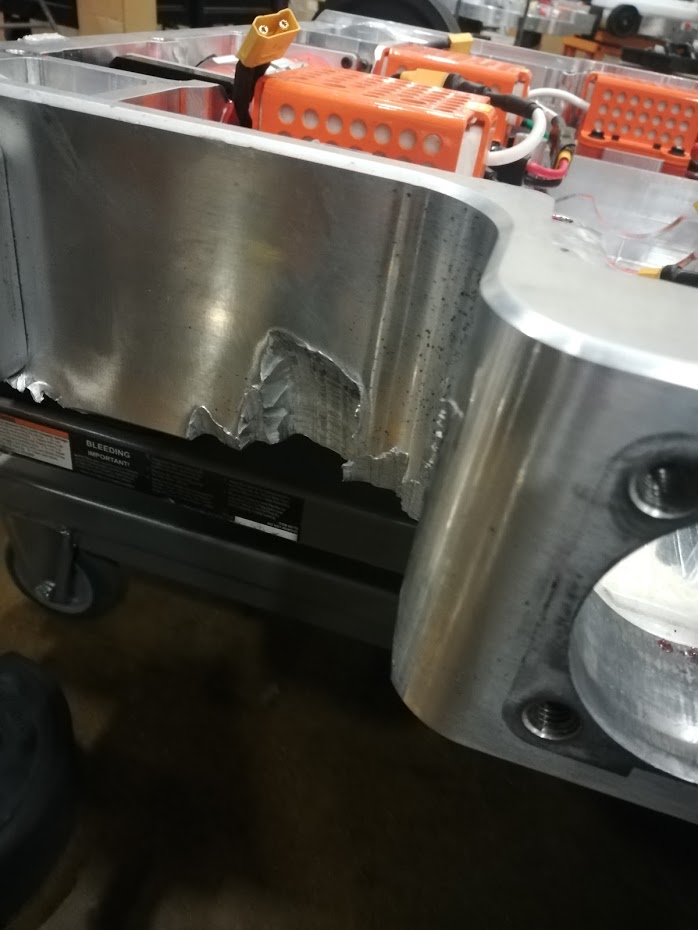 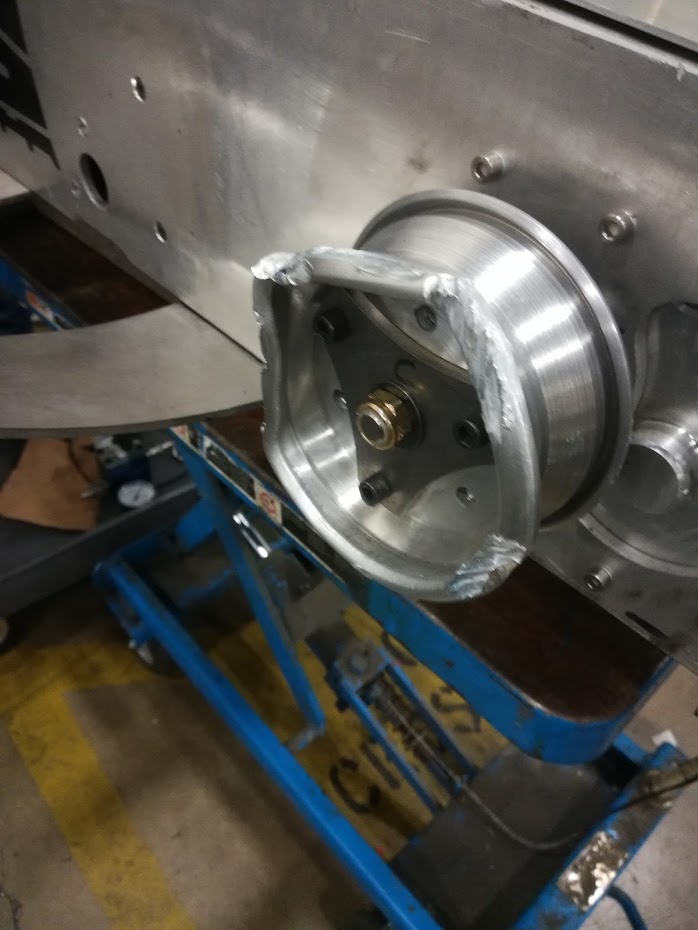 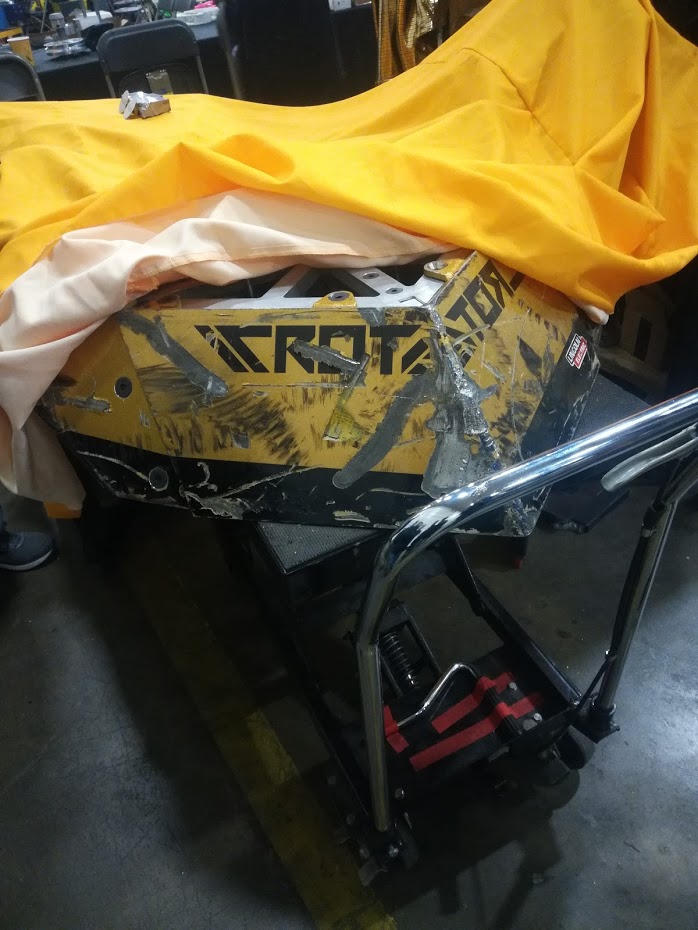 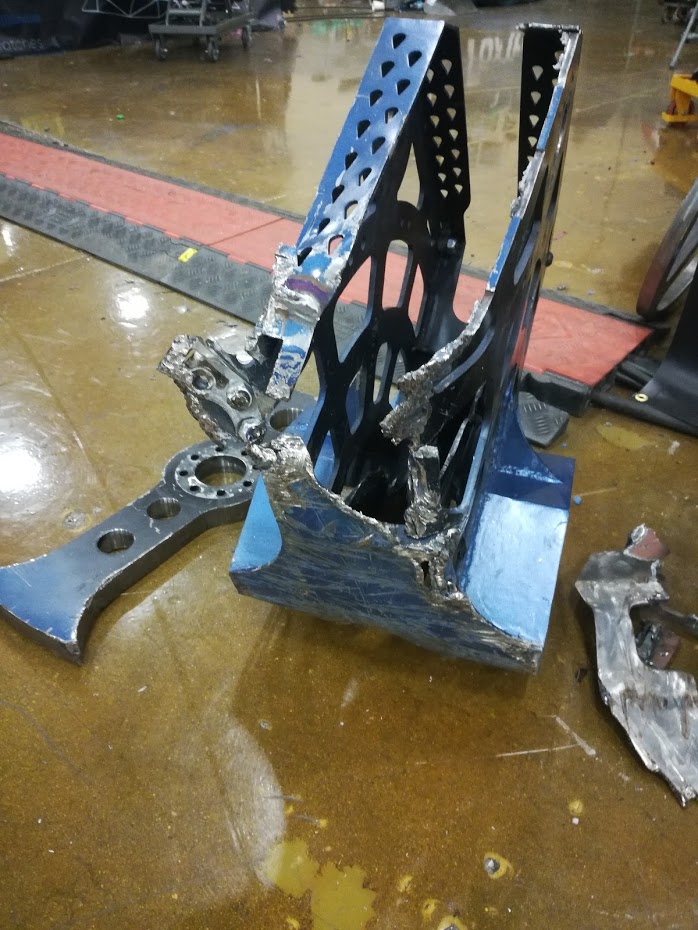 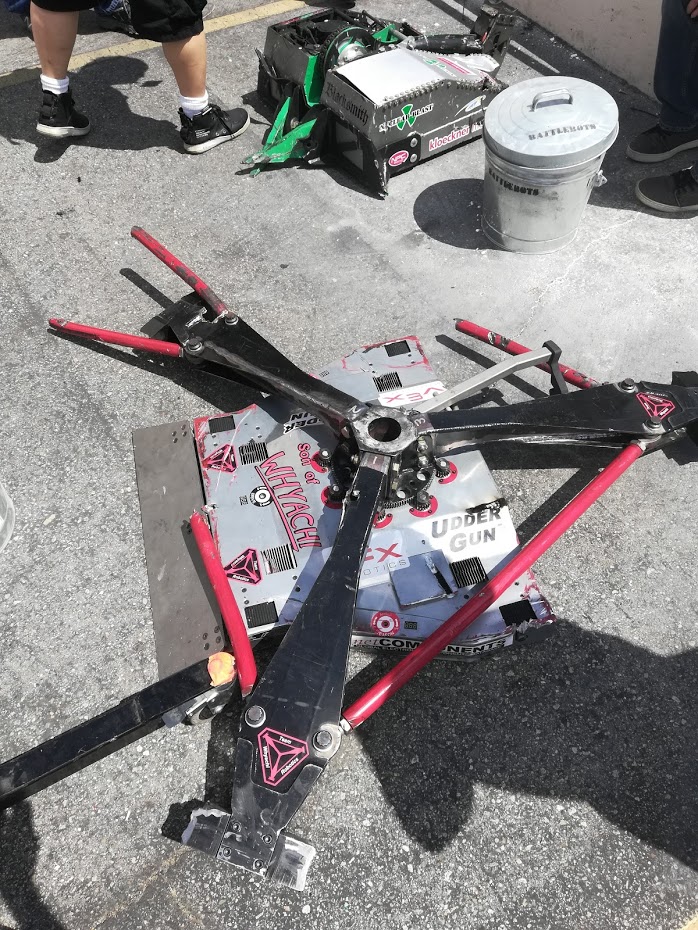 During down-time between matches, we chatted with a bunch of local builders, and it turned out that there's a pretty vibrant mini-bots scene in the LA area, for 1lb (US antweight) and 3lb (beetleweight) classes. Just like that, I found myself a new hobby to half-ass. Jamison (Sawblaze team captain) has been dominating the 3lb and 30lb scene out on the East coast, so he was more than happy and gracious to coach teammate Jake and me on being competitive. I think Jake took the advice more seriously than myself. I just wanted to build bots to try weird stuff and feed my Nightmare/Backlash fandom: 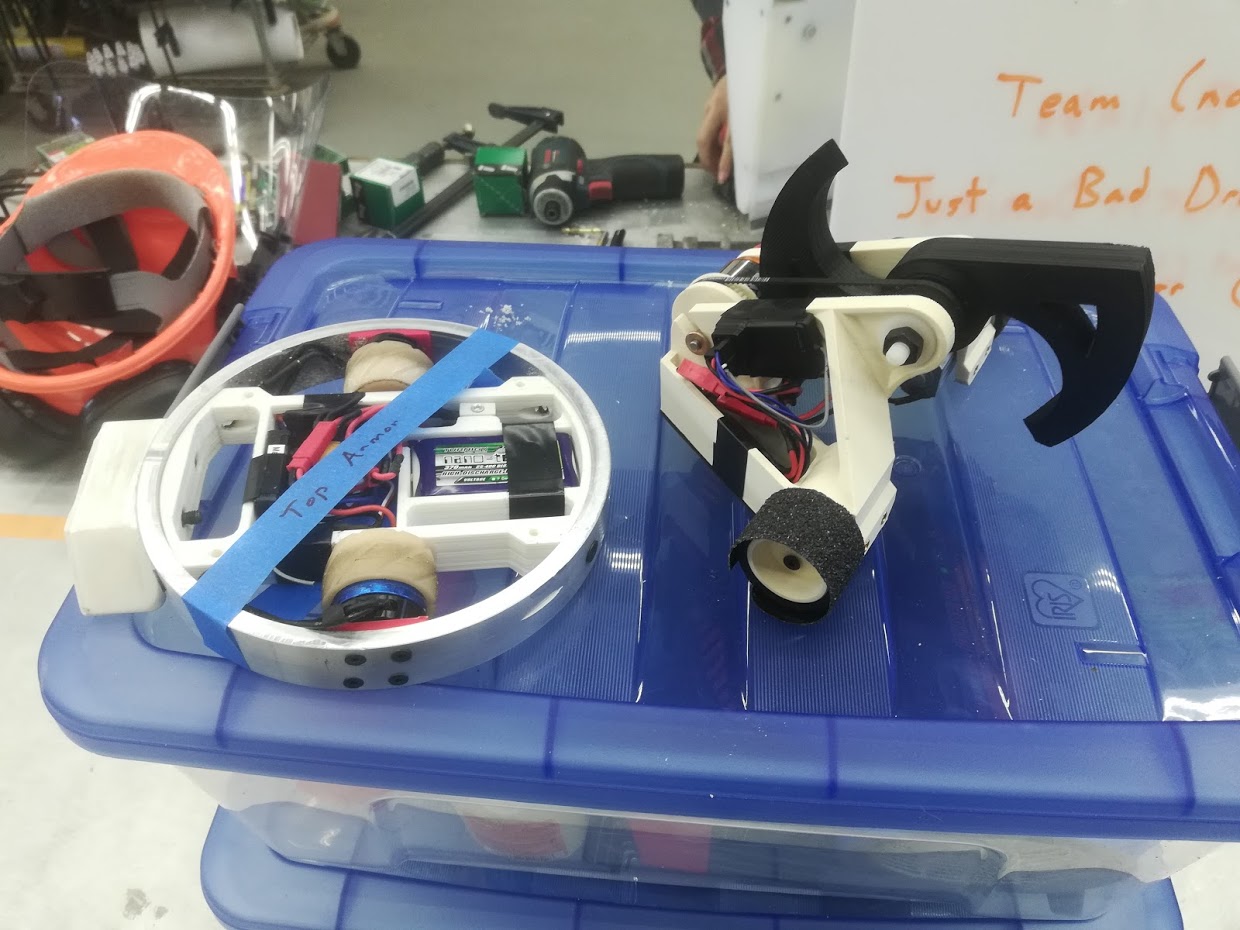 That's my meltybrain concept "Rounding Error" on the left, and my Nightmare/Backlash homage: "Just a Bad Dream" on the right. I literally have zero control authority on the former, and the weapon the latter only spins 50% of the time. Neither really work all that well. Both have randomly stopped mid-fight with little to no explanation. Both have also gotten wrecked and rebuilt repeatedly. Still incredibly fun.

My best fight to date (which I lost)

I think the best thing about robot combat, both big and small, is that all the engineering things we learn in school are simultaneously critically important and also go straight out the window. We can theorycraft and model and second-guess ourselves all day, but sometimes there are simply tried/true designs that withstand the test of time. We're all building our own little bundles of destruction that sometimes have as much chance of destroying itself as it does its opponent.

Ran out of steam on writing this post. Hope to detail some of my designs and attempts (especially my meltybrain bot) in the future (but don't hold your breath).